This option is only available until the 31st of August. Therefore, will be unavailable from the 1st of September.

Seoul City Tour Bus is a shuttle bus that runs the hottest course in Seoul. It offers a great time to enjoy ancient history and modern history with ears and eyes through a professional audio tour guide in 12 languages. Also, have fun enjoying all your five sense by shopping and eating delicious Korean foods in Seoul :)

Seoul City Tour Bus for those who want to look around Seoul but are hesitant on a hot or cold day! Traveling around 22 stops, you will be guided to popular tourist attractions including N Seoul Tower, Myeong-dong, Itaewon, Namdaemun Market and the National Museum of Korea. You can get off at the desired stop to observe the city freely and use the following bus every 30 minutes. Around Gangnam Course offers a tour of the major tourist attractions in Gangnam-gu. Once you visit COEX, Gangnam Station, Garosu-gil (Sinsa Station), and other famous places in Gangnam, you will fall in love with Gangnam. This is the best course to listen to the story of Gangnam in more details through a professional audio tour guide in 12 languages.

1. Purchase the desired product and Check the mobile voucher or email voucher.

3. Present your voucher at the ticket counter(Gwanghwamoon/Gangnam) and get a real ticket(bracelet).

※ The boarding place is designated as Gwanghwamun, but you can get on and off at any stop

※ The boarding place is designated as Gangnam Station, but you can get on and off at any stop

1. Vehicle distribution intervals may change depending on vehicle maintenance or the booking status.

2. The type of vehicle may be changed depending on vehicle maintenance or the booking status.

3. Panorama Course: Sebitseom will be excluded during the weekends and public holidays (Parking lot congestion)

4. Bus seats are not designated. For the first stop, Gwanghwamun Station, most people can sit and enjoy the tour. If you board in the middle of the course, you may have to stand without a seat if there are many customers. You may stand-in if you want to.

5. Due to cold weather (from October), you may feel cold at night. Please bring or wear warm clothes for the Night Course.

6. The Gangnam Course bus might be fully booked quickly on weekends or holidays. We recommend you to board on the bus early. When the bus is full, you cannot take that bus; please take the next bus.

7. Please be sure to exchange your voucher at Gwanghwamun or Gangnam Station before Boarding. You may not be able to board on the bus when not redeeming the physical ticket.

8. Children under the age of 4 can board up to 1 adult for free and please must bring the passport due to age verification will proceed on the site.

Q. Is there a guide for each course?

A. Audio guides are provided for each course.

A. Bus seats are not designated. You can freely sit in or stand in and enjoy the tour.

初めての韓国旅行だったのでシティーツアーバスを利用。観光地を巡ってくれるし好きな所で降りられるので自分の好みに合わせて予定を組めて良かった。ソウルの街並みを眺めながらよい思い出に。
From
₩ 17,000
Save up to
6% 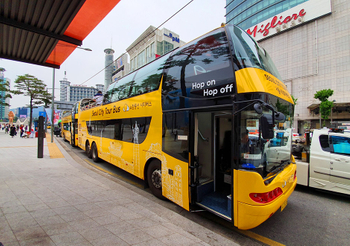