Wonderful trip, on the eve of the typhoon. We will visit Mount Halla in the future.
Read more reviews

Jeju Small-Group UNESCO Day Tour – South side of Jeju island is for those who looking for Jeju’s UNESCO heritages, Great scenery, and High-quality tour. The picturesque island of Jeju is a UNESCO–listed gem lying off the southern shores of South Korea. On this all-inclusive full-day UNESCO tour, experience the best of Jeju Island in one day with entrance fees, lunch, and round-trip travel from your downtown hotel included. • Hike up Mt.Halla, reach sites of interest including Jusangjeolli cliff, Cheonjiyeon falls, and enjoy personal attention from your guide on this small-group tour—limited to 15 people per group. This tour is available on Tue/Thur/Sat. There’s a hundred-meter section on 1100 Road where things roll upward. This road became known to the world in 1981 when a couple on honeymoon got out of their car for photo taking while placing their car gears in neutral and witnessed it rolling upward. This road actually has 3-degree downward slant but the surrounding terrain makes it look like an upward slant. 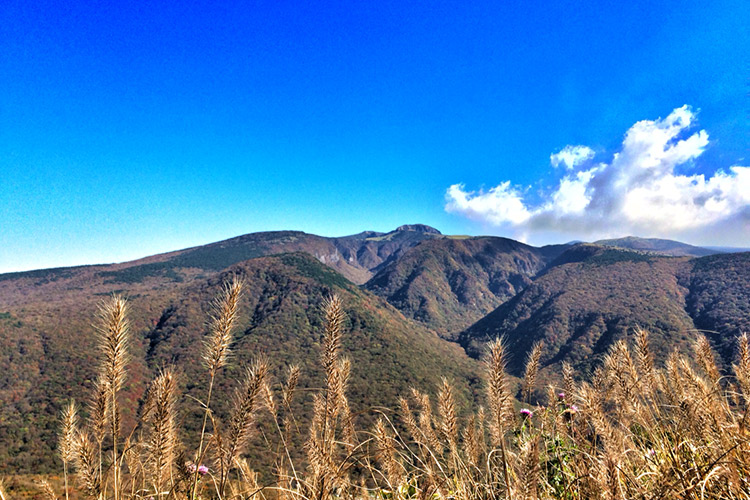 Hallasan Mountain stands proudly at the center of Jeju Island and is perhaps the island’s most memorable landmarks. Also called Mt. Yeongjusan, meaning “mountain high enough to pull the galaxy,” Hallasan Mountain is widely known by scientists for its geological value. It was designated as the national park in 1970, UNESCO Biosphere Reserve in 2002, UNESCO World Heritage in 2007, UNESCO Geopark in 2010.
• Eoseungsaengak rises 1,169m above sea level. It takes approximately 30 minutes to climb to the top along its 1.3 km long trail.
You can enjoy the amazing view of Jeju city on the front side and Submit of Mt.Halla at the behind.
• When the road is closed due to heavy rain, heavy snow or icy road, it will be replaced with visiting Jeju National Museum. The 1100 Altitude Wetland is a remarkable place to view the diversity of plant and animal species which inhabit the wetlands of the Jeju, which was included on Ramsar List in 2009.

A mountainous wetland consisting of a number of unique freshwater marshes and pools, situated on Jeju Island. As the name suggests, the site is located at 1100m asl within the Mt Halla World Heritage site. The wetland is in an area of low gradient enabling the capture and retention of freshwater, to form small permanent lakes and peat bogs that support diverse floristic assemblages and significant endemism.

• When the road is closed due to heavy rain, heavy snow or icy road, it will be replaced with visiting Jeju National Museum. Following the farm road about 600m to the southwest from Daepo-dong, at the end of the pine tree forest is a cliff. At the base of this cliff is the Jisatgae Coast along with the imposing stone pillars. Jusangjeolli are stone pillars piled up along the coast and is a designated cultural monument of Jeju Island. Jusangjeolli Cliff was formed when the lava from Hallasan Mountain erupted into the sea of Jungmun. They are rock pillars shaped like cubes or hexagons of various sizes and almost seem as if stone masons had carved them out. The administration of the district named them ‘Jisatgae Rocks’ from their old name ‘Jisatgae’. The 20m cliff makes it a popular spot for high tide and sea angling. The waves of the high tide crashing into the side of the cliff provide a breathtaking view of the ocean surrounding the pillars. The architectural style of Yakcheonsa Temple is reminiscent of that of Buddhist temples of the early Joseon Dynasty. Measuring an impressive 30m high and spanning a total area of 3,305 meters squared, it is the largest temple in the East.Upon entering Yakcheonsa Temple, guests will be greeted by a 5m-tall statue of Vairocana, the tallest of such statues in Korea, on a 4m high pedestal. The walls on both the right and left have been sculpted into large altar portraits of Buddha and in front of the Dharma Hall is a giant Buddhist temple bell, weighing 18 tons. Beloved for its size and grandeur, the temple consists of a main temple (2,652 meters squared) and a 3-story residential structure for the Buddhist monks. Seogwi Dawon, located at the foot of Mt. Halla, is a place built by an old couple who are dedicated to protecting and preserving Jeju’s tea culture. The farm owner is producing only the quality green teas.

Every Tuesday, Thursday and Saturday

• If you are staying out of Jeju city downtown area, you must come to 'Core Travel's office' 1st floor by 9am.

• Proper meeting time for each destination will be notified separately. Please be at the Lobby 10 minutes before.

1. This Tour is not a private tour. Up to 15 people will be joining in the tour.

2.  Hotel pickup is only available in Jeju city downtown area. Customers who are staying out of Jeju City downtown area, please write "Core Travel's office ' on the pick up location.

3. Please make sure to write the Hotel address as the tour may be not be possible if there is no address written down.

4. Tickets are not refundable even if you don't enter the tourist destinations.

5. Not recommended to the customers who can't go around for a long period because of any chronic illness.

6. Infants under 24 months are free (No extra seat given)

7. If visit to Mt.Halla is not possible due to Rain or Safety issue, the destination will change to Jeju National Museum

2. Will receive the exact time of pickup the day before the tour via mobile or email.

• Cancellation 1 day before or on the day : No Refund