Gyeongbok Palace was once a Joseon Dynasty's palace and is now a famous tourist destination. An opportunity to learn about the history and lifestyles of the royal family from the Joseon Dynasty. Although it was partially damaged due to the fire and invasion of the foreign powers, after continuous restoration work, the beauty and history of Gyeongbok Palace are now well preserved.

Insadong preserves Korea's traditions and customs in the past. It is a place not only filled with the beauty of Korea but as well as the past traditional cultures of Korea. Take a look at Insadong with the help of professional tour guides!

Founded in 1926 Seoul City Hall is a Renaissance-style stone building. Seoul Square in front of City Hall is a historic site where the 1919 (Samil) Independence Movement and the pro-democracy movement in June 1987 were held. It is also a well-known place where thousands of Korean soccer fans gathered to cheer during the 2002 World Cup Games. 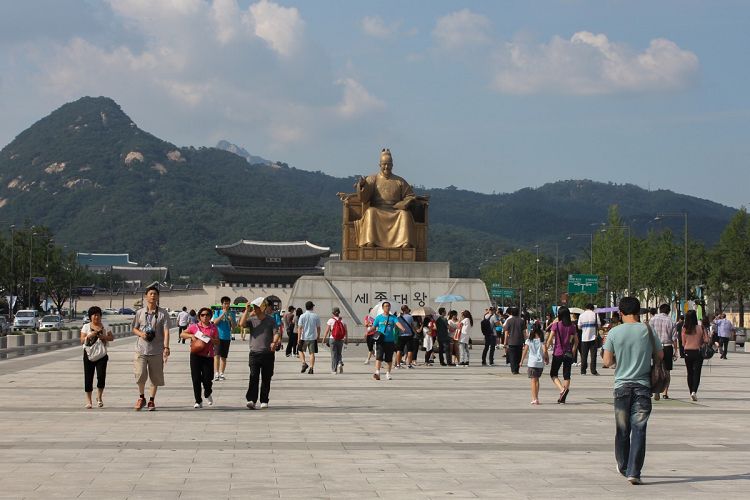 Gwanghwamun Square is a plaza that opened in June 2009, which connects Gyeongbok Palace and Cheonggye Plaza. It is loved as a historical and cultural experience space for citizens and as a resting area. The Gwanghwanmun Square is composed of 'Recovering the History of Gwanghwamun Gate Plaza', 'Reenacting Yukjo Street Plaza', 'Korea Main Plaza', 'Civil Participation Urban Culture Plaza', 'Memorial Waterway'. At the crowded Seoul city, inside of its central area, you will hear the sound of reciting Buddhist scriptures and smell the soft fragrance of incense. Jogyesa Temple is a resting place for everybody to relieve their stress. If foreign tourists visit this representative Buddhist temple of Korea, Jogyesa Temple, they will also feel the Korean Buddhism culture through Buddhist cuisine restaurants, traditional tea house, Buddhist supplies that are nearby the temple. Kyeongbokgung Palace is one of the oldest of the five places in Seoul. It is such a great and magnificent building as a representative of the Joseon Dynasty. The premises were once destroyed by fire during the Imjin War (Japanese Invasions, 1592-1598). However, all of the palace buildings were later restored under the leadership of Heungseondaewongun during the reign. Remarkably, the most representative edifices of the Joseon Dynasty, Gyeonghoeru Pavilion, and Hyangwonjeong Pond have remained relatively intact. Insa-dong is a must-visit place for foreign celebrities when visiting Korea. Not only hundreds of art galleries but, dozens of traditional handcraft shops, antique art markets, and traditional tea houses can be found in Insadong. Because of the development of modern civilizations, many foreign coffee shops and restaurants have launched around the place, yet this area unconventionally using Korean on their gate signs.

Minimum number of people to proceed

1. Please make sure to arrive at the meeting point on time!

2. The schedule may change depending on the weather or local situation.

3. Gyeongbok Palace, Sajeongjeon, National Folk Museum are closed on Tuesdays. On Tuesday, the palace will be replaced by Deoksu Palace.

4. If it rains or snows, the tour will be canceled and the payment will be 100% refunded.

5.  If the tour is canceled, you will be notified by the CS team via email.

6. It is the traveler's responsibility if there are any accidents arisen from not following the tour guide's instruction.